ABOUT DREW AND THE BISTRO 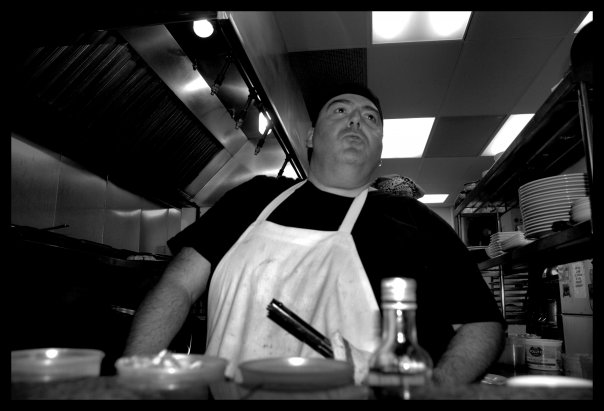 Drew’s Bayshore Bistro was opened in 2005 by Andrew Araneo in his home town of Keyport, NJ. Chef Drew has been into cooking since childhood and received his professional culinary training at Brookdale Community College in Lincroft, NJ. He then honed his skills at several prominent New Jersey restaurants, including Joe and Maggie’s in Long Branch and Whispers in Spring Lake.

Chefs inspire us, but who inspires them?

From An Article by Teresa Politano | For Inside Jersey

For our annual Top Chefs issue, Inside Jersey asks five culinary newsmakers to talk about their work and how their mentors have influenced them.The stories are presented as chefs’ narratives. Here, Drew Araneo’s story.

Drew Araneo moved his restaurant to higher ground after Hurricane Sandy. Joe Romanowksi’s restaurant, Bay Avenue Trattoria, also was destroyed by Sandy. It never reopened. Romanowski died of cancer on Aug. 12, 2013. Since his death, friends have created the Joe Romanowski Culinary Education Foundation to offer an annual culinary scholarship in his name. The first fund-raiser is set for March; see the foundation’s Facebook page for details.

“The tattoo is the first thing everyone sees: It’s a knife, a Wüsthof, a classic chef’s knife, but its blade is strung like a guitar. Cooking is how I make my music. Another tattoo is less visible, two forks crossed in defiance, with their tines, like fingers, bent to create the sign of the horn. If you have an Italian grandmother, you know the gesture. It’s the evil eye, to ward off bad luck. That tattoo sits on the bicep, just under a shirt sleeve, ready when needed. That tattoo I got after (Hurricane) Sandy.

Keyport is a good tattoo town. Broken Heart, Fat Kat, Taboo. You have a three-month waiting list. Plenty of time to be sure what you want.

If you live in Keyport, you live in a humble and grand place; you go down to the water and the whole town seems incredibly vulnerable and yet incredibly blessed by the Atlantic. Waterfront Park really transformed this town, it made a working-class village seem suddenly like a seaside resort. But after Sandy, it all strikes you as a mockery — the gazebo, the promenade, the stone walkway, just so much frivolous human extravagance. The sea demands its respect. Even the glorious and historic captain’s homes, with their expansive oceanfront views — New York City is right there — show their architectural deference to the ocean: the widow’s walk. It’s definitely a haunted town.

Sandy ruined Bayshore Bistro. A few stoves were salvaged, that was it. We were down four months, no job, no sales. Someone offered a space in Atlantic Highlands. But Keyport is my town, I grew up here. Some friends set up a fundraiser to help, $50 a person, a big covered-dish party. The night of the event, I was spackling in our new space. I didn’t want to attend. I was embarrassed. Maybe not embarrassed, that’s not the right word, but I’m a shy guy. I don’t like to call attention to myself. I have trouble pushing myself out into the dining room to say hello to my guests. Someone insisted I go over. It was emotional. It overwhelms you. People I never thought to see were there. I didn’t know they cared that much. They raised $17,000. We really needed it.

Then came the ‘throwdown’ in June with Bobby Flay. If they had said the fix was in, you’re gonna go in and lose, I would still have done it. You hear things about celebrities, and Bobby Flay was swarmed as soon as he stepped out of his big black Escalade. But he was more than gracious, a real regular guy. ‘Hey chef, nice to see you.’ I didn’t know I was supposed to be in the VIP tent, too.

The key to my Voodoo Shrimp is the sauce; it starts with dark beer and takes at least a couple of hours to make. You can’t replicate a sauce like that in a couple of minutes. Winning that ‘throwdown’ was great for business. Bobby Flay handed me one hell of a summer.

I was late deciding I wanted to be a chef. An instructor at culinary school pulled me aside with a job prospect. Cut your hair. Put on a shirt and tie and go see Joe.

Joe Romanowski was a local culinary treasure, first at Joe & Maggie’s Bistro in Long Branch, later with Bay Avenue Trattoria in Highlands. He was uniquely trained — learning first to cook on a shoestring as a child in a large Polish family, later honing his skills in over-the-top, fine dining kitchens, such as Le Bec-Fin in Philadelphia. Joe was forever getting nominated for James Beard awards, and he was forever humbled by that.

I didn’t cut my hair — I was a metalhead. I didn’t even cut my hair for my wedding — plus, what if I didn’t get the job? But I did put my hair in a ponytail and I did put on a tie. I was
33 years old and I was getting a minimum-wage job in the restaurant business.

If you grow up in an Italian family, you snub your nose at French food. It’s all precious, all cream and butter. But Joe served country French food. It doesn’t get any earthier than that. He had such a wealth of knowledge. A lot of what we do now is rooted in what I learned from Joe. He taught me how to break down a duck, marinate the breasts, make duck confit, roast the bones. His soups were packed with flavor. A lot of important people working in the industry went through his kitchen.

Joe had a great work ethic. You didn’t get too many breaks in Joe’s kitchen. He taught me this: Sometimes you gotta stick up your middle finger and say bring it on. I think the only fault the man had was that he was an Eagles fan.”